In memory of Christine Maggiore 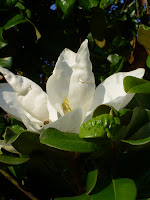 The Magnolia tree stands proud beside our Florida oaks and pines. It has a regal bearing, beautiful white blossoms and shiny tough leaves. Despite hurricane winds and torrential rainfall, it has stood tall. Christine Maggiore was the world's magnolia blossom. Delicate but standing tall and strong among the many people who question hiv/aids doctrine. Her book, "What if everything you thought you knew about AIDS WAS WRONG?" helped open my mind to the questions that surround hiv/aids science. I spoke on the phone with her once, many years ago. I was surprised and delighted to talk with such a warm, intelligent woman. After Eliza Jane's (Christine's 3 year old daughter) death a few years ago, I was disturbed by how the media not only distorted the situation but was downright nasty about Christine. It bordered on the irrational, but I thought that's the media. But I have had to rethink this situation since Christine's untimely death. Is this poor behavior of the media, an irrational media shark-frenzy?
Let's look at the CDC website on Health Marketing. The CDC is paying for the social marketing of hiv/aids. The CDC website states, "Knowing that 88 percent of people in America learn about health issues from television, we believe that prime time and daytime television programs, movies, talk shows, and more, are great outlets for our health messages." so..."In May 2000, the Office of Communication at the CDC convened an expert panel of fourteen mass communication scholars to develop a research agenda for entertainment education."
http://www.cdc.gov/healthmarketing/entertainment_education/index.htm
The CDC works in partnership with Hollywood, Health & Society at the University of Southern California's Norman Lear Center. These people helped script the Law & Order episode called "Retro," which was based on Christine Maggiore's life. To hear Christine's view of this episode:
http://www.howpositiveareyou.com click on the podcast that deals with "Retro." What is painful to hear is Christine talking about how this episode had her dead at the end of the story. I wonder how psychologically anyone can cope with a Hollywood dramatization of our life in which we are "killed" off. National TV and there is your life up for everyone to see (things distorted because that is what Hollywood does). And the writers make you dead, when the reality is that you are still alive and well. What kind of psychological mind games do social marketers play on people? They convince us that their version of reality is TRUTH because they have studied the human psyche. They are the experts on mind manipulation. Interesting that the CDC has to hire these people to get their health-e "information" to their target audience.
The CDC has a webpage on eHealth Marketing. One of their media activities is BLOGS.
http://www.cdc.gov/healthmarketing/ehm/
Yes, blogs. What I noticed after Christine's death is some of the blogs were publishing and stating misinformation about Christine and her life. And that many of the comments allowed on these blogs were just plain nasty. So I wondered how many of these blogs were paid for by the CDC? I actually made a comment to one blog called "denyingaids" written by a Professor Seth C. Kalichman asking whether he was funded by the CDC. I asked this question to this blog because he discussed Christine Maggiore's death, had pictures of hiv denialists. No answer to my question and my comment was not published. Early this morning, I ran across an interesting document. Professor Seth C. Kalichmann is employed by the Center for Health/HIV Intervention & Prevention which is part of the Psychology Department of University of Connecticutt at Storrs. This organization was established in 2005 and is funded by a $3.8 million federal grant from the CDC.
http://www.chcm.uconn.edu/annua-report_05-06_webcopy.pdf
Seth Kalichman wrote a book called, "Preventing AIDS." He writes on page 154, "Social marketing emphasized the importance of tailoring product campaigns to fit the characteristics of population segments."
Here is a blogger, whose organization is funded by the CDC, who is waging a campaign against hiv/aids denialists, particularly Christine Maggiore. The CDC obviously thinks that part of their mission is social marketing (which in my book is basic advertising and closely related to propaganda). How many other bloggs on the internet are actually part of the CDC market strategy? A market strategy that is willing to smear people's lifes in order to sell more condoms, hiv test kits, and hiv meds. Is this a responsible use of funding for health? How much of this smear campaign resulted in the suffering of Christine Maggiore and her family? And it hasn't stopped, even though she died. The CDC spent $531,101, 751 on hiv/aids in 2007. Some millions of that went into social marketing programs.
http://www.statehealthfacts.kff.org/comparetable.jsp?ind=529&cat=11
Brave new world, group think.....get onto the internet and who do you believe?
I salute you Christine, you stood up for what you believed, you asked the questions that needed to be asked. You suffered the consequences of a world gone mad on the belief that health has to be marketed.
copyright 2009 Valerie W. McClain
Posted by Valerie W. McClain at 7:17 AM 2 comments: