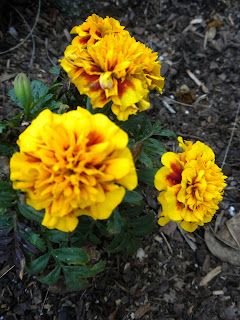 I am not particularly fond of daffodils.  And I don't really know why.  They don't grow well in Florida.  In fact, I have never seen them growing in the ground in Florida, but I have seen them in pots in the grocery store around Easter.  When I think of daffodils, I think of Easter and its symbolism.  Rebirth comes to mind, spring, rising again;  religious symbolism that are embedded in my psyche.  I think of the color, yellow;  when I think of daffodils.  Then my mind trips over to patents and inventions.  Yes, I never stop thinking about inventions or patents, particularly when it involves infant feeding.  Remember Golden Rice and how biotech would save the world from vitamin A deficiency
by creating a rice with lots of vitamin A.  Do you know how they created Golden Rice?  The rice carries the gene from a daffodil;  a gene that expresses phytoene which is a key to the synthesis of beta-carotene.  The petal of the daffodil or the petal of the marigold holds the key to producing carotenoids.   Vitamins for you and me and baby makes three.

So what has this got to do with the Daffodil Study in Indonesia, a study that has been receiving a lot of criticism from breastfeeding advocates in Indonesia as well as around the world?  I don't know, if there is a connection between the symbol, the Daffodil and the study?  It seems to be just a curiosity in my head.  Does the daffodil symbolize a specific brand of infant formula?  Or the Indonesian University?  Or the Indonesian Pediatric Society?   I really don't know.  What infant formula are they testing on infants that are younger than 4 months old?  What baby formula company is involved with this study?  Is it just the Indonesian University and its Department of Pediatrics that is funding this study?  The study is called, "Effect in Using Formula Composed with Cow's Milk Fat, Enriched with Mixed Fats and Added Fosfolipid [Phospholipids] on Duration and Infection in Babies' Digestive and Respiratory System."  How does informed consent work in regard to research on babies using infant formula, particularly in countries that have high levels of poverty and high infant mortality rates?

The BBC News Asia-Pacific (dated November 2010) reported, "In Indonesia a new law has been passed that stipulates all babies should be exclusively breastfed for the first six months of life.  From early next year [2011], anyone who stands in the way of this will be fined up to 100m rupiah (7000 pounds, $11,000) and sentenced up to a year in prison."  Researchers are under some serious obligations to see that exclusive breastfeeding is not disrupted by such studies.  Since there is a petition up on change.org to stop this research, I wonder whether the law was revoked or been unenforceable?  For those interested in signing the petition to stop this research, this is the website:
https://www.change.org/en-GB/petitions/daffodil-study-research-team-stop-the-daffodil-study#

At the NIH clinical trials website there is 132 infant formula studies going on world-wide, most funded by various infant formula companies in various stages.  Some studies are completed, some terminated, some no longer recruiting and some actively recruiting babies.  Studies in countries such as China, Mexico, Vietnam, Indonesia (2 stated but neither is the Daffodil Study-Danone and Fonterra funded), and the USA.  Within the last decade the infant formula industry is introducing new/novel ingredients.  Most of those novel ingredients have never before been eaten by human beings.  And yes its about genetic engineering those ingredients, using genes from one species in combination with genes from other species.   A recent patent application from an employee of dupont de Nemours is called, "Carotenoid production in a recombinant oleaginous yeast."  They mention the use of genes from the petals of daffodils or marigolds to add to a recombinant host.  This is to produce/engineer not only carotenoids but also omega3/omega6 polyunsaturated fatty acids.   And yes this patent application is about using this in foods and infant formula.   So we are recombining genes and creating substances that have never been eaten before by the human species.  Should infants be a part of this experiment?  And no I don't know if the Daffodil Study has anything to do with using novel ingredients.  And I really don't know what these 132 infant formula clinical trials are testing.  Are we testing for safety?  Are parents being given informed consent about all the possiblities in these clinical trials?  And really, really should infants even be in clinical trials involving novel foods??  How do researchers protect exclusive breastfeeding doing this kind of research?  What populations are enrolled in this study?  Is this research done in poorer districts, those marginalized by society?  In the US, is this research directed at the poorer communities and/or the African American communities?  Who does the recruiting of mothers and how is it done?

So what is the daffodil to me?  Symbolic of the ease in which genetic engineering has become part of our food industry which not only impacts adults but our most vulnerable population, infants.  The Daffodil Study may have nothing to do with the genetic engineering of ingredients of infant formula.  But it should raise questions for many around the world who are concerned about research and the problems of ethical research when it involves infants.
Copyright 2013 Valerie W. McClain 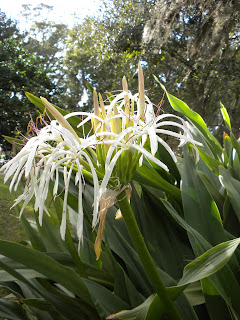 Let's look at some of the statements made by the author, Lisa Selin Davis.  She is an excellent writer, by the way, having written articles and won awards for writing about real estate and various issues like parenting.  I love the statement, "well-meaning lactation consultants urge them to try harder..."  Yeah, if I was still a lactation consultant I wouldn't be so pleased about this comment.  That sentence goes on to say,"...while doctors might advise them simply give up and go the bottle-and-formula route."  Hm, let's grade this clinical trial, docs 10, ibclcs 1.

"...but the truth is that breast-feeding is very difficult for many women."  Yes I do believe that psychologically we have just been given the stab in the back.  Is breastfeeding the difficulty or is it a society that creates those difficulties?  Is breastfeeding a totally physical function or is there enormous social and psychological issues in our culture (along with the ever-present infant formula marketing) that predispose breastfeeding "failure."  Oh wait, lets get the terms correct, lactation failure.

Last quote that makes my day, "Perhaps most importantly, we need to stop demonizing mothers who can't breastfeed, guilting them into starving their kids with insufficient milk supplies rather than supplementing with formula."

Yes, you-you, IBCLCS are creating guilt in mothers.  I never heard of an IBCLC doing that except in PR articles and blogs that I suspect were paid for by the infant formula industry.  So we are going to perpetuate the myth that it is IBCLCs who are browbeating mothers?  Let me see but the Doc who is an IBCLC doesn't do this because they will prescribe infant formula for insufficient milk supplies?

Hm...you know I think that IBCLCs instead of applauding this article might consider asking who paid for this article?  Or who wanted this PR, because this is absolutely what this article is...public relations.  Let's get more docs to be IBCLCs because according to this article they will take the time to visually inspect breasts (yes you can produce, no you can't-you are the 5% oh wait next year it will be the 10% who can't breastfeed).  Oh wait, I think all the IBCLCs I know actually do look at breasts and do medical histories.  But you wouldn't know this by this article.

I understand why I am no longer an IBCLC.  Reading the comments by other IBCLCs who think this article is so-so wonderful, is totally baffling. The medicalization of breastfeeding will most certainly screw breastfeeding, just like the medicalization of childbirth has created our soaring c-section rates.  This article is PR, big time.  There are wonderful doctors who support and help breastfeeding mothers. But if the theme from the medical community becomes that breastfeeding is very difficult, then that is what we will build a nation full of women having a difficult time breastfeeding.  The percentage of women unable to breastfeed will increase because breastfeeding is a confidence game.  Breastfeeding is more than a product decision, human milk vs. infant formula, its about how society cares for mothers and babies.  And our society doesn't much care for women or babies and certainly not together.  Insufficent milk syndrome is the infant formula calling card.  It is played and a replayed theme in the media and in this particular article.  Where are we going?
Copyright 2013 Valerie W. McClain