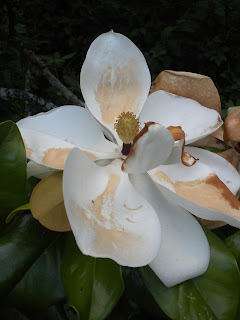 "Historically, the most terrible things-war, genocide, and slavery have resulted not from disobedience, but from obedience."--Howard Zinn

It rained for a while and then the winds blew.  I watched the giant oak from one of my windows that was not bordered or shuttered closed. It twisted and it danced, gyrating through the air.  I wondered when the limbs would snap and drop onto the road.  How long could the poor tree stand to be a puppet to the gods of nature?  Mesmerizing and frightening, I sat watching this gigantic tree fight for its life.  There was no music to this dance.  There was no remote to turn the channel or press the on or off switch.  There was no newscaster to interpret and explain this event.

Hours and hours later, the winds died down and I learned that the Eye of the Storm had passed and had moved onward up the coast.  I stepped outside and surveyed my front yard.  The lawn was under water but hadn't reached the house.  My Queen Palm tree had punched into the roof and my Cherry Laurel tree uprooted listing onto the roof and entangled in my cable, power and phone lines.  I never heard these trees fall, not sure why I didn't hear it.  In fact before I saw the trees, I thought this hurricane was not so bad.  Hurricane Charlie (2004) was worse than this. With Charlie my house shook and groaned and in the aftermath roads were impassable.  Matthew was a gentle giant of a storm in comparison.  This time I was only out of power for 5 days not 11 days.  Pretty amazing considering that my power lines from the house to the power pole were on the ground this time.  But walking around the neighborhood, I could see that there was a lot of wind damage. Once again my view of my town is of blue tarps on roofs and mountains of tree limbs, roots and twigs dragged to the side of our roads.  Sadly, many oaks as well as other trees were uprooted.  Their massive roots exposed to the air, heaving concrete and earth in a display of the power of mother nature.  I grieve for all the creatures, human and animal, plants and trees that suffer from such a storm.

I am tired.  Hurricanes do that to people.  We wait for the approach and prepare for the storm.  Not much sleep and bone-tired from stress and the physical work.  Then the storm and the inactivity, life interrupted.  The power goes out and the isolation from the electronic world quiets my mind.  Its rather peaceful without Facebook and the News.  The hurricane was like putting a blanket over my head and drowning out the political madness we call elections.  Didn't know what was going on and really didn't care.  The only reality I had to deal with was my own storm, not the storm of the nation.

I'd like to say that when the power came back on, I delved right into the news.  Instead I found myself distancing myself from the political storm.   The big news I had missed was a recording of Donald Trump in 2005 making lewd and revolting comments about women.  No surprise to me that he thinks women are only good for one thing.  Most of us, women, have heard similar crap talk from men.  Of course we always assume that our own boyfriends or husbands don't talk like that or think that way.  But it is surprising that a man who thinks this way can become President.  Yes, I guess not so surprising.  Since 9-11, the American public is tolerant of war after war in the middle east, rendition and torture of suspected terrorists, drone assassinations of supposed enemies, the murdering of our black citizens without a trial.   And with this election, will we tolerate more directed violence at people who have a different skin tone, faith, gender or sexual orientation?

While Hurricane Matthew blew away, there is this political storm brewing in our nation.  And all I want to do is go to bed and put the covers over my head.  "Wake me up when its over."  I am tired.  Tired of the insanity of our society and people pretending that everything is just hunky-dory (just fine).  But dealing with this political storm is like dealing with a hurricane.  Going to bed and putting the covers over your head, just postpones the inevitable.  Ya have to go outside and look at the mess, the debris piled high, the damage.  And then ya have to go to work to clean up the mess.  It means that ya have to talk to your neighbors, help them if needed or just share the hurricane jokes.

So whats this got to do with human milk patenting?  The political storm that has been brewing in this nation for almost 2 decades has infected every aspect of life.  Organizations no longer feel the need to be transparent or accountable to members.  Ethics have been replaced with a code of silence.  Social marketing has replaced thoughtful communication.  The same political authoritarianism I see in our political system has engulfed many breastfeeding organizations.   I am weary and tired after 17 years of being a broken record regarding the importance of these patents.

We know the damaging effects of hurricanes.  The government warns us of those dangers:  death, destruction of property and loss of income.  We are told to board up our homes and evacuate.  All of the expert advice is directed at people who have the money to board up their homes, have transportation and money for gas to evacuate for days.  The accuracy of the predictions of the path of a hurricane are less known.  The experts aren't always right about the path that a hurricane will take. It's a game of roulette.  Stay or Go?  But for many the choice to leave or stay is written in their bank account balance and the belief in the accuracy of government or an expert's prediction.  Like a hurricane, birth and breastfeeding is a choice based on your bank account and belief in the experts.  No money, no choice.  And if one is the least bit skeptical of experts, one makes a choice that "experts" don't understand.

For those interested, here is a Nestle Patent #9480671 entitled, "Reduction of risk of obesity," filed in 2013. This patent states that in the past 30 years obesity has rapidly increased.  Interestingly the infant formula industry, as we now know it, began some 30-40 years ago.  And now Nestle realizes that the first 6 months of life are critical to the risk of obesity in later life. So they will change their formulation and reduce the risk.

Increasingly it is believed that the first 6 months of life represent one of the most important postnatal periods for human fat mass development and consequently may be a critical window for programming excess of adiposity later in life. Moreover, human epidemiological data and animal studies evidence that elevated body weight at birth or during infancy are associated with a risk for development of diseases such as insulin resistance syndrome (also called metabolic syndrome), Type 2 diabetes and cardiovascular problems later in life."

Truth or Fiction?  And if its truth, why aren't we demanding that the industry stop advertising to parents?  As for hurricanes and politics, I have no answers.  We are living in challenging times where Truth has become irrelevant and Lies persist.  I feel wind-blown and tattered like the leaves on the tree after the hurricane has passed.  I feel as fragile as those leaves, just part of the debris left by the storm.  Hurricane Matthew turned into the mother of all hurricanes.
Copyright 2016 Valerie W. McClain

Posted by Valerie W. McClain at 6:19 AM No comments: